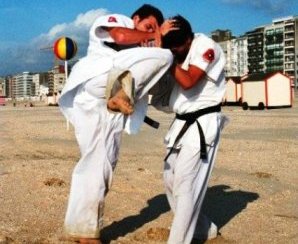 The tactic of Buddhakado consists of avoiding the attacks of the opponent, bringing him out of balance and eliminating him as fast as possible, thus giving him no chance.

The fighting symbolism is also expressed in the Kandu with:

- The moon standing for fighting in half circles

- The sun for fighting in full circles.

- The great Mount everest, the highest mountain in the Himalaya, symbolizing line of sight, but also representing the limits you  set yourself.

- And the fist which is you, not in the line of sight of your attacker.